The Earliest Days Of Water-travelling

Once upon a time there were no ships. Men did not know the meaning of the word; they did not want them; and, for many, many centuries the sea-gulls had the ocean all to themselves. But boats are

of very ancient date. Doubtless the first boats must have been constructed by the first men who dwelt on the earth. They consisted, probably—for we are now in the land of conjecture—of stumps of fallen trees, or bundles of rushes, seated astride of which the immediate descendants of our first parents ferried themselves over small lakes and across rivers.

Wet feet are not agreeable under any circumstances. We can conceive that prolonged voyages performed in this fashion—say several hundred yards or a mile—rendered those primitive mariners so uncomfortable, that they resolved to improve their condition; and, after much earnest thought, hit upon the plan of fastening several logs together by means of twigs, and thus they formed rafts.

As time progressed, and men began to display wisdom in making tools of stone and in the moulding of metal, we can imagine that they soon bethought 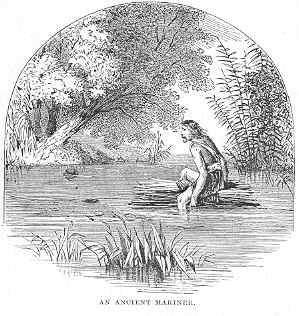 themselves of flattening the surface of their rafts; and then, finding them unwieldy and difficult to manage, no doubt, they hit upon the idea of hollowing out the logs. Adzes were probably not invented at that time, so they betook themselves to the element of fire—which is at the present day used by savage nations for the same purpose—and burned out the insides of their logs. Thus canoes sprang into being.

But such canoes were clumsy and heavy, besides being liable to split; men therefore bethought themselves of constructing a light framework of wood, which they covered with bark or skin. Then artificers in iron invented saws; logs were ripped up; planks were formed; pitch oozed ready to hand from the trees; with grass, perchance, they caulked the seams;—and soon the first boat floated on the water—clumsy and tub-like, no doubt, but serviceable withal—and youths of a hundred years old, and full-grown men of two or three hundred, capered and shouted on the shore with delight at the great invention; while venerable patriarchs, of seven or eight hundred summers, gazed in wonder, with almost prophetic solemnity, and exclaimed that they had never before seen the like of that in all the course of their long, long lives!

Those times are old now—so old that men can scarcely get their minds to realise how old they are; nevertheless, the craft that were used then are used even now, and that not only among the savages of distant lands, but by men living at our very doors.

The coracle, a basket-boat of the most primitive description, is still occasionally met with in South Wales. It is neither more nor less than a large wicker basket covered with a hide, and is tub-shaped, and clumsy to a degree. When the Romans invaded Britain, this species of boat was in common use. 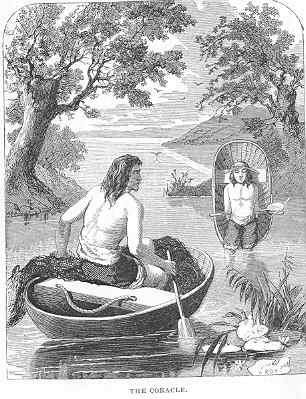 Like the canoe of the North American Indian, it is easily upset, and we should think must be rather unmanageable; but as we are not likely ever again to be reduced to it in this country, we can afford to regard its faults with indifference.

From little boats to big boats there is but a step; and no doubt rivers were soon navigated, and new countries explored, while those who lived near the sea-coast dared even to launch their boats upon the ocean; but they “hugged the shore,” undoubtedly, and seldom ventured to proceed at night unless the stars shone brightly in the sky.

Years rolled on, and dwellers on the sea-coast became more and more venturous in their voyages along the shore. It behoved them to have larger boats, or barges, with numerous rowers, who would naturally carry weapons with them to guard themselves from foes. War-galleys sprang into being. Strong winds sometimes carried these off-shore, and out of sight of land. Ah, reader! who can conceive the feelings of the first mariners who saw the solid land sink on the horizon, and beheld nothing substantial in all the waste of waters, save their own tiny bark that reeled beneath them on the heaving billows? Perchance these first adventurers on the deep found their way back to land, and afterwards tried the bold experiment of steering by the stars. Perhaps not; but at length it did come about that ships were built, and men were found bold enough to put to sea in them for days and weeks together.

The ark is the first ship of which we have any authentic account. We now leave the region of conjecture; for the ark was built by Noah under the immediate direction of the Almighty, and we have a minute account of it in the Bible.

More than two thousand three hundred years before our Lord and Saviour Jesus Christ came to earth, man’s wickedness had attained to such a height that God resolved to destroy the inhabitants of the world by a deluge. But, in the midst of wrath, God remembered mercy. He spared Noah and his family, and saved them from destruction by placing them in the ark along with pairs of the lower animals.

Every reader of the Bible knows the story of the deluge; but everyone may not be aware that traditions of this deluge are found in every part of the earth. East, west, north, and south—civilised and savage—all men tell us of a great flood which once covered the world, and from which only one family was saved, in a boat, or a canoe, or an ark.

What the barbarous and savage nations know dimly from tradition, we know certainly and fully from the inspired Word of God. The ark was built; the flood came; Noah with his family and two of every living creature entered into it; and for months the first ship floated on a sea whose shoreless waves flowed round and round the world.

What the ark’s form was we cannot precisely tell; but we know its dimensions pretty accurately.

Although it was not intended for voyaging, the ark must necessarily have been a perfect model of a vessel, meant to float upon the waters. To some extent, too, it must have been fitted to ride upon turbulent billows; for it “went upon the face of the waters” for upwards of seven months, and before it rested finally on the top of Mount Ararat, “God made a wind to pass over the earth, and the waters assuaged.” In regard to its size, the most interesting way to consider it, perhaps, will be to compare it with the Great Eastern, the largest ship that has yet been built by man. Assuming a cubit to be about 18 inches, the length of the ark was about 450 feet, its breadth about 75 feet, and its depth about 45 feet.

The Great Eastern’s length is 680 feet, its breadth 83 feet, and its depth from deck to keel 60 feet.

The ark was built of gopher-wood, which is thought by some to be pine, by others cedar. It consisted of three stories, and had a window and a door, and was pitched within and without. But it had neither masts nor rudder; and it is evident that, although it was man’s refuge, the ark was not designed to be managed by man, for after Noah and his family had entered in, God took on himself the guidance and preservation of their vessel. Thus our Saviour—of whom the ark was a type—specially guides and protects those who flee to him for refuge.

But although we have noticed the ark as being the first ship, we cannot with propriety place it in the front of the history of navigation. After the flood the ark seems to have been soon forgotten, or at least imperfectly remembered, and men reverted to their little canoes and clumsy boats, which sufficed for all their limited wants. It was not until about a thousand years later in the world’s history that men built ships of considerable size, and ventured on prolonged coasting-voyages, for the purposes of discovery and commerce. Navigation had been practised, and the art of ship-building had made very considerable progress, long before men dared to lose sight of the shore and venture out upon the mysterious bosom of the great unknown sea.

To the ancients the Mediterranean was the ocean; and among its bays, and creeks, and islands, maritime enterprise sprang into being and rose into celebrity. Among the Phoenicians, the Egyptians, and Hebrews, we find the earliest traces of navigation and commerce. The first of these nations, occupying the narrow slip of land between Mount Lebanon and the Mediterranean, rose into fame as mariners between the years 1700 and 1100 before Christ—the renowned city of Sidon being their great sea-port, whence their ships put forth to trade with Cyprus and Rhodes, Greece, Sardinia, Sicily, Gaul, and Spain. Little is known of the state of trade in those days, or of the form or size of ancient vessels. Homer tells us, in his account of the Trojan War, that the Phoenicians supplied the combatants with many articles of luxury; and from Scripture we learn that the same enterprising navigators brought gold to Solomon from Ophir in the year 1000 B.C.

A short time previous to this the Phoenicians ventured to pass through the Strait of Gibraltar, and for the first time beheld the great Atlantic Ocean. 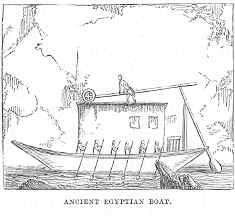 Proceeding along the coast of Spain, they founded Cadiz; and, not long after, creeping down the western coast of Africa, established colonies there. But their grandest feat was achieved about 600 years B.C., when they sailed down the Red Sea and the eastern coast of Africa, doubled the Cape of Good Hope, sailed up the western coast, and returned home by the Strait of Gibraltar. Bartholomew Diaz must hide his diminished head before this fact; for, although he gets all the credit, the Phoenicians of old “doubled the Cape” at least twenty centuries before him!

That long voyages were made by the men of old, before authentic history began, seems highly probable. The expedition of the Argonauts to Colchis in the year 1250 B.C., in search of the “Golden Fleece,” is the first ancient voyage that lays claim to authenticity. What the Golden Fleece was is uncertain; some think it was a term used to symbolise the mines of precious metals near the Black Sea. Whatever it was, the Argonauts went in search of it: whether or not they found it is unrecorded in history. Jason, son of the King of Thessaly, was the leader of this expedition, which consisted of one ship and fifty men. A man named Argus built the ship, which from him was named the Argo, hence the name of Argonauts.

In treating of ancient vessels, we may as well proceed on the principle suggested by a sagacious child, who, when his mother was about to tell him a story, usually begged of her to “bedin at the bedinning.” We shall begin at the beginning.

Previous: Treats Of Ships In General
Next: Rafts And Canoes