Ships begin life with a retrograde movement; they imitate the crabs: in other words, they are launched stern foremost. Whether great or small, long or short, whether clothed in patrician copper or smeared with plebeian tar, they

all start on their first voyage with their stern-posts acting the part of cut-water, and, also, without masts or sails. These necessary adjuncts, and a host of others, are added after they have been clasped to the bosom of their native sea. One notable exception there is to this rule, the launch of the far-famed Great Eastern, which monster of the deep was forced into her element sidewise, of which a full account will be found in another part of this volume.

The cradles on which ships are launched are wooden frameworks, so constructed as to slide down an inclined plane, called the ways, bearing their burdens along with them into the water. When a ship is ready for launching, the shores, or supports, that have kept her so long in position are knocked away one by one, until the entire weight of the ship rests on the cradle. The ways are then well greased, and it only remains to knock away one or two remaining checks to allow the vessel to seek her future home by means of her own weight.

But before this last act is done, a day must be fixed for the launch; friends of the owners must be invited to go on board during this her first voyage; a fair maiden must be asked to go through the ceremony of giving the ship her name; and paragraphs must go the round of the newspapers. As the hour draws near, crowds of human beings, young and old, male and female, must hurry to the spot to witness the great event, and hundreds of little boys must beg leave from school (if they can); in short, a great stir must be made, and a great day must dawn, before the last shores are knocked away, and the noble structure be permitted to rush down that inclined plane, and for the first time cleave the waves.

And now, having shown how the launching of our ship is accomplished, let us turn to consider the next step towards completion; for there is yet much to be done ere she is able to brave the tempest.

Although fitting-in the lower-masts of a ship cannot well be deemed a part of the rigging, we will nevertheless describe the operation here.

As the lower-masts of a large ship are from five to six feet in circumference, it is manifest that some powerful mechanical contrivance is required to raise them over the bulwarks, and put them in an upright position, into their appointed places. Such contrivances, in the form of enormous cranes, are fixed in some of the larger docks; but the most useful method is to have the masts put in by means of:

The Shear Hulk. This is a strongly built hull of a ship, moored in a part of a river or harbour that will afford depth of water to float vessels of any size alongside. It has one stout mast, with two immense beams attached to it near the deck, and sloping outwards over the bulwarks in such a way that their ends overhang the deck of the vessel into which masts are to be placed. These sloping beams are prevented from falling overboard altogether, and their slope is regulated, by blocks and tackles from the mast of the hulk. By means of this contrivance, which is just a gigantic floating crane, the ponderous lower-masts of large ships are raised and lowered into their places.

When these are fixed, the rigging of the ship commences. The method of putting it up cannot prove interesting to general readers; not even to boys, for when they take to rigging model ships, they do not require the mechanical contrivances that are necessary in rigging large vessels. But all readers of sea stories and nautical history will find it of the utmost advantage to their clear understanding of what they read, to have a general idea of the names and uses of the principal parts of a ship’s rigging.

We shall, therefore, devote a small space to the explanation of this subject. And, first, let us examine the Masts.

These vary in size, form, and number in different ships, but in all they serve the same purpose—to support the sails. Lower masts of large vessels are never formed out of one tree. They are found to be stronger when built up of several pieces, which are fastened together by strong iron hoops. Masts sometimes consist of three distinct parts. The lower-mast, top-mast, and top-gallant-mast. In most large ships there are three masts, each having three parts. The centre mast, being the largest, is the main-mast; the front one, which is next in size, is the fore-mast; and the one next the stern, the smallest, is called the mizzen. 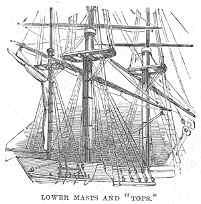 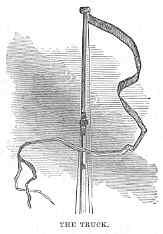 The button-like objects on the summits of the masts are called the trucks; which, besides forming a sort of finish to them, are fitted with small pulleys, through which signal-halyards, or cords for hoisting the flags, are rove.

In first-rate men-of-war the tops are so large that a number of men can be stationed on them. Besides their other purposes, they are very frequently used as a place of punishment for the midshipmen, or “middies” (the boy officers), who are often sent there to air themselves, and profit, if they can, by calm reflection in exalted solitude.

Shrouds and stays are the thick ropes that keep the masts firmly in position. They form part of what is termed the “standing gear” of a ship—in other words, the ropes that are fixtures—to distinguish them from the “running gear”—those movable ropes, by means of which the sails, boats, flags, etcetera, are hoisted. Nearly all the ropes of a ship are named after the mast, or yard, or sail with which they are connected. Thus we have the main shrouds, the main-top-mast shrouds, and the main-topgallant shrouds; the main back-stay, the main-topgallant back-stay, and so on—those of the other masts being similarly named, with the exception of the first word, which, of course, indicates the particular mast referred to. 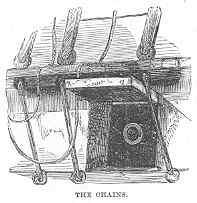 The shrouds rise from the chains, which are a series of blocks called “dead eyes,” fixed to the sides of the ship. To these the shrouds are fixed, and also to the masts near the tops; they serve the purpose of preventing the masts from falling sideways. Backstays prevent them from falling forward, and forestays prevent them from falling backward, or “aft.” Besides this, shrouds have little cross ropes called ratlines attached to them, by means of which rope-ladders the sailors ascend and descend the rigging to furl, that is, tie up, or unfurl, that is, to untie or shake out, the sails. 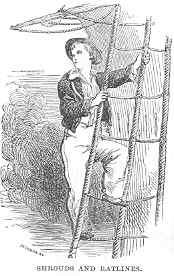 Our cut represents a sailor-boy ascending the mizzen-top-mast shrouds. He grasps the shrouds, and stands on the ratlines.

Yards are the heavy wooden cross-poles or beams to which the sails are attached.

Reef-points are the little ropes which may be observed hanging in successive rows on all sails, by means of which parts of the sails are gathered in and tied round the yards, thus reducing their size in stormy weather. Hence such nautical expressions as “taking in a reef,” or a “double reef,” and “close reefing,”—which last implies that a sail is to be reduced to its smallest possible dimensions. The only further reduction possible would be folding it up altogether, close to the yard, which would be called “furling” it, and which would render it altogether ineffective. 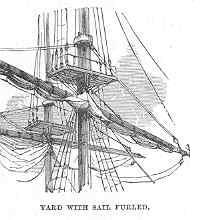 In order to furl or reef sails, the men have to ascend the masts, and lay-out upon the yards. It is very dangerous work in stormy weather. Many a poor fellow, while reefing sails in a dark tempestuous night, has been blown from the yard into the sea, and never heard of more. All the yards of a ship, except the three largest, can be hoisted and lowered by means of halyards. The top-gallant masts can also be lowered, but the lower-masts, of course, are fixtures.

The bowsprit of a ship is a mast which projects out horizontally, or at an angle, from the bow. It is sometimes in two or three pieces, sometimes only in one. 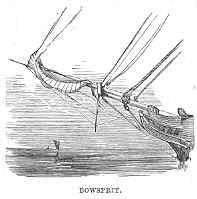 To it are attached the jib-sail and the flying-jib, besides a variety of ropes and stays which are connected with and support the fore-mast.

The cat heads are two short beams which project from the bows on either side, and support the ship’s anchors. 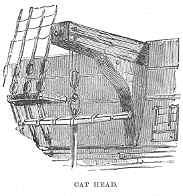 Miscellaneous.—The openings in the decks are called hatches; the stair-cases which descend to the cabins are called companions. The pulleys by which sails, etcetera, are hoisted, are named blocks. Braces are the ropes by which sails are fixed tightly in any position. Hauling a rope taut, means hauling it tight. The weather side of a ship means the side which happens to be presented to the wind; the lee side, that which is away from the wind, and, therefore, sheltered. The starboard side means the right side, the larboard signifies the left; but as the two words resemble each other, the word port is always used for larboard to prevent mistakes in shouting orders. Heaving the lead is the act of throwing a heavy leaden plummet, with a line attached, into the sea to ascertain its depth. It is thrown from the chains as far as possible ahead of the ship, so that it may reach the bottom and be perpendicularly beneath the man who heaves it when the ship comes up to the spot where it entered the water. A peculiar and musical cry is given forth by the heaver of the lead each time he throws it. The forecastle is the habitat of the ordinary sailors, and is usually in nautical parlance termed the foge-s’l. 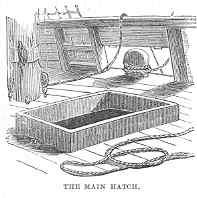 Most of what we have just described applies more or less to every ship; but this will be seen in future chapters. Meanwhile, we would seriously recommend all those who have found this chapter a dry one to turn back to the heading entitled “Rigging a Ship,” and from that point read it all over again with earnest attention.